Vision of Judgement and Blessings for the Faithful

“Well done, good and faithful servant! You have been faithful with a few things; I will put you in charge of many things. Come and share your master’s happiness!” (Matthew 25:21).

Also, “Then He will say to those on His left, ‘Depart from Me, you who are cursed, into the eternal fire prepared for the devil and his angels” (Matthew 25:41).

Some of us reading here will hear either one of these two statements when it is our turn to face God at the final Judgement. As it is, judgement is sure and God has set a Day aside for this to happen (Revelation 20:11-15). This is not a complete teaching on God’s righteous judgement to put things right, but a reminder that all human activity will be judged.

Beloved brethren, as we promised on this website that there would be an update on the vision of the huge black figure and the huge white figure, the Lord has provided more clarity on this vision which we will be sharing below. Also, I have included a hand drawn sketch by Charis to illustrate and add meaning to the vision. After the Lord saw that we shared this vision with you, He added two more scenes. Precious people, this is for you from our Lord Jesus Christ. It is to warn you and encourage you. Very soon, these prophetic visions will be fulfilled. Hold on faithfully!

Furthermore, like the visions of the prophet Daniel about the four beasts, these represent earthly kingdoms (Daniel 7:1-28). The Lord in His Wisdom used four people or individuals who are fitting the judgements and blessings He pronounced. Additionally, the Holy Spirit has made it clear to me that the four groups represent the state of affairs in the world. The first time I shared this vision I thought it was complete, but the Lord added two more scenes. As you would recall, the first vision reports the apostasy or Christians turning back to the world and away from the Lord. For your convenience, I have copied and edited it to include the other two new scenes the Lord added.

For the past two years, and since the Lord has been speaking to Charis, she has been shown the same vision four times a week. Admittedly, I ignored this important vision until recently when the Lord alerted me about its importance. This is not just to encourage Christians to witness, but to encourage you to remain faithful to your faith in God and salvation

Below is the vision of the huge black and White figures as explained by Charis:

“Every second night, the Lord shows me (without saying anything to me) a huge black figure (I am made aware in the vision that this is the devil) made out of smoke or steam in the shape of a man standing on the other side of a shiny golden street, and a huge White light-emitting figure on the other side of the golden street. These figures have people standing behind them that reflect their colour or texture. In the vision, I see after about every 15 minutes or so three (3) to four (4) people and then one (1) person leaving the White figure (I know this is the Lord), and go to the side of the black figure. The moment they leave the White figure and go to the other side of the street, they become black from their feet up and go stand behind the black figure. This black figure would lift up his head and laugh, and while I am not able to see their faces, I do see the long yellow teeth of this laughing black figure. This is how I know he is laughing.

On the night of November 25, 2012, the Lord Jesus Christ unveiled the meaning of the vision of the black figure, the white figure and the other two new scenes He added.

The White Side (Faithful Witness)

On the above night the Lord showed me again this vision. This time I was allowed to see the face of one person who is part of our ministry team. Their faces are dazzling white and blurry so I could not recognise them. This person was standing there reading his Bible and after reading he closed his Bible and started speaking. I could not hear what he was saying while the Lord looked at him intently, and I heard the voice of the Lord saying: “Look at My son, he is very obedient. He is reading his Bible faithfully every day, and he is praying faithfully daily, and he is a faithful witness of My Word. I am going to bless him abundantly” (Matthew 25:21; Revelations 3:4-6). The Lord said this is the inheritance of the faithful and obedient. After the Lord showed me the activity on the white side I turned and saw a different kind of people.

The Purple Side (Humble People)

Above this group of people was a board written in pink incursive letters, “The Humble People” Like the white, the people on this side are covered in a rich purple colour to disguise their faces. The Lord did however show me a face of a person. This was one of our ministry people. The Lord looked at her and said: “Look at My daughter, she is very humble and she allows nothing to discourage her, I am also going to bless her abundantly” (Matthew 5:5; Revelations 2:25-26).

Thereafter I was shown another group of people.

The Yellow Side (Bullies)

The board above this group reads: “The Bullies” These people were covered in a yellow substance so I was allowed to look at the face of only one person, a well-known woman. Brethren, this is the harlot (Revelations 17:1). This is the unfaithful, lukewarm and disobedient Christian. This Christian prostitutes herself with other religions. They despise the Holy word of God and He pronounced Judgement on them. The Lord showed Charis the activity of this woman. While most of it is symbolic, the point the Lord is making is that this group is completely wicked. They show no regard for God and His Word. These people are anti-Christ in their behaviour and God-haters.

I saw a certain woman standing next to an old radio. The radio was on high volume. She had a Bible in her right hand. The woman suddenly threw the Bible violently to the floor and started jumping and jumping on it. She then picked up a Mormon bible which was lying on a small table next to her and she started reading from it. After reading the Mormon book, she put it down and picked up a Quran and also started reading it. To my surprise, she took the Bible from the floor not to read, but she started tearing some pages from the Bible and put in her mouth and spit it on the floor. I then saw her holding the Bible with both hands and shaking it violently as if she was in some rage. Then I heard the voice of the Lord saying: “Look at her; she is making My Holy Word a doormat. She is despising My Word; and she is reading things that she is not supposed to read. I am going to punish her severely” (Revelation 18). I was made to turn to the black figure and his group of people.


The Black Figure (World of Pleasure)

When I looked at this group of people, I was again allowed to look at the face of one person whom I also know very well. I heard the Lord said: “Look at the other one, he is drinking and smoking, partying and he is all over the place, I am also going to punish him severely” (Revelation 21:8). I saw this man holding a glass of whisky and ice with a long cigar in his mouth. He had blood shot eyes, he was moving around quite freely from place to place on the black side. While the devil was just standing there laughing. After the Lord showed me this vision, He showed me a vision involving a pastor.

This vision is a direct warning to pastors and ministers of the Word of God. My heart goes out to this pastor and many others who will face the same fate. My sincere prayers is that may the Lord use this visions to awake many of them to live right so that they will not be disqualified for the prize (1 Corinthians 9:27).

In this vision, I was shown a pastor whose church I once attended. He happens to be the pastor of the two people I saw the one on black side and the other one on the bullies side. He was preaching and I heard him say: “People, you must be obedient to the Lord, read your Bibles and pray because the Lord is coming soon”. The vision changed and I saw him in his house. He opened a DVD player to insert a CD. I then saw two CDs placed on top of the DVD player entitled: “Rihanna - greatest hits” and “The very best of Beyoncé.” As he reached to insert the Rihanna CD, I heard one of his daughters say: “Those are my CDs!” He ignored her and proceeded to play the CD. I could not hear the music, but I was shown that it was playing. While the music was playing, he took his Bible and opened it to Hebrews 4 and read. The scene changed and I saw him standing before the Throne of the Lord to be judged. Further away from this pastor were quite a few hundred people dressed in white clothes standing on the right hand side of the Lord. Then the Lord told him: “You preached that the people must be obedient and now they are in Heaven and you are going to Hell”. The Lord commanded an Angel standing nearby and said: “Take this cursed man away from My Presence and cast him into the Lake of fire” (Matthew 25:41; Revelation 20:11-15). Then I saw the angel seized him like he was a dirty cloth and threw him in the fire.

BE READY, MESSIAH IS COMING! REPENT, REPENT I REPEAT REPENT! And walk obediently! JUDGEMENT IS COMING!

Below is the hand drawn sketch by Charis, followed by a color visual of the same: 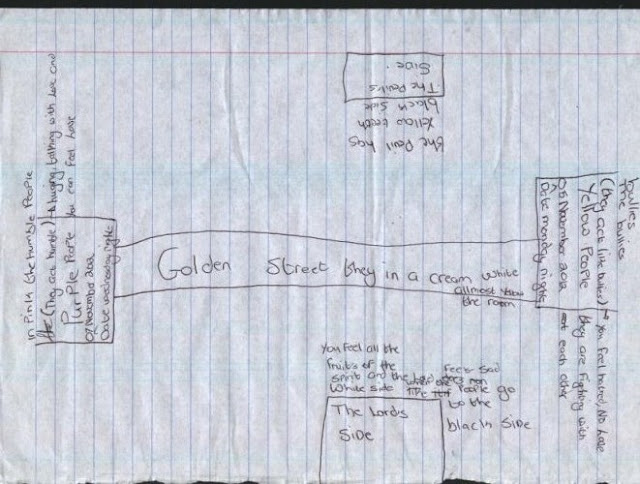 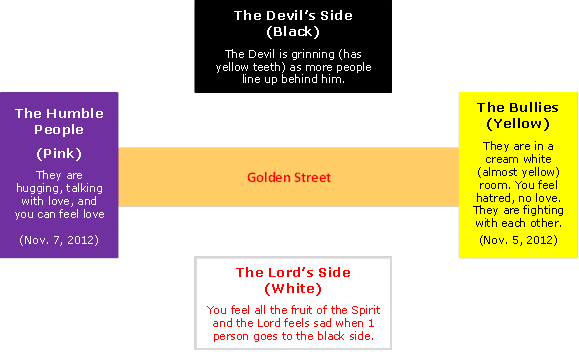