The term idol refers to any object or person regarded with admiration, adoration, or devotion, other than God. The world as we know it is full of these objects, images, demons, and even people that are idolized. Concerning idols, the Bible says …”We know that an idol is nothing at all in the world and that there is no God but one” (1 Corinthians 8:4 NIV). We wrote an article on idolatry in July last year on the sin of adultery; this is a follow up to that article.

We will also share a short vision from the Lord at the end of this article, but please don’t jump straight to this vision; this message is from the Lord and He wants you to be adequately warned.


Idols We Hold On To

An idol is created and this comes about by the will of man. Therefore, following an idol does not come by a conviction, but rather by choice, which could be via “coerced choice” (Daniel 3:1-7), or by free will (1 Kings 18:26; Exodus 32:1-4). Today, we find ourselves in a similar position. There might not be many Nebuchadnezzars or like-minded officials, but the pressure society and businesses have created through the mass media has a same effect – forced compliance. The motive is always enrichment of those who promote the idol, while we are deceived to give and sacrifice our lives to keep the idol relevant (Acts 19:23-34). The Lord says that there is a demonic presence behind every idol people hold to. This is to attract people to the idol.

Furthermore, when we talk about idols, the Lord commanded that we point out to the things people idolize. The world has created every kind of thing to keep us occupied and dependent on it. The Apostle Paul boldly says, “They exchanged the truth of God for a lie, and worshipped and served created things rather than the Creator – who is forever praise worthy. Amen” (Romans 1:25 NIV). Therefore, our labor is utilized more for earthly things and the best we can get here than for things pertaining to life (John 6:27). The prosperity teachers have done a good job by pointing people to the promises of God more than right living. They have thus succeeded in creating more need-minded Christians than God-fearing ones. Through their false teachings, we are encouraged to look to the things we can see and claim from God. We are told to desire the best things. Brethren, this is deception; it is a gospel that promotes greed and selfishness.

Also, the world easily introduces us to idols. We are encouraged to have role models, heroes and mentors. Interest in them is created through some well elaborated success stories of those who achieved something in this world and are being used as a catalyst to show us the way. The media creates them and through them another idol is introduced – some product or person. The message we are given by these idols, be they persons or some brand, is “confidence”, “style” and “ego”. This will put us on par with the rest of society, or even elevate us higher, according to the projected message.

Christians who are not rooted in the Word of God are easily led astray into the world system. They always follow someone, except Christ. Brethren beware; there are some worldly pastors out there (see the Pastors Repent article). They will always encourage you to follow your dreams; but do those dreams you have line up with God’s plan for your life? (Romans 12:1-2). According to the Bible, we should dream to be better Christians through humble service to Christ Jesus (Hebrews 12: 1-3; Psalm 40:8).

In addition, a short while back, we were given some visions concerning certain ministers of the gospel whom the Lord rebuked publicly for preaching error and elevating themselves. As it is, a brother and sister who both received messages from the Lord opposed us. These precious brethren were idolizing these men so much that they accused the Lord of being wrong in His rebukes of these preachers. Idolaters always elevates their idols above God and His truth. They accepted the Lord's messages on other subjects, but regarded any message relating to their idols as false. How hypocritical and shortsighted! Truth sets us free (John 8:32).  The Lord also rebuked someone for her effort in defending her idol, exposing the wicked things she does (see witchcraft article). The Lord told us those who idolize man are not rooted in His word, and they will be judged with those they follow (Numbers 16:31-35).

When the Lord rebukes us, He expresses love and He is protecting us from the wrong path (Proverbs 3:11-12); so why be guilty before the Lord by defending man? The Lord is Supreme Judge and He is a Jealous God. He says don't follow man but Christ (Jeremiah 17:5-8). Indeed, The Lord commands that we be rich in good deeds and if we pursue good deeds there will not room for the pursuit of worldly gain (1 Timothy 6:17-19).

Sadly, some Christians are so worldly that the only things they talk about are their idols and things they desire, and they pay little attention to God. I might sound conservative here, and indeed the Lord said I must mention this, sports such as soccer or American football are idolized, and many pastors either postpone or cancel church services because they or some of their members want to go and watch the games. These worldly events do not win souls, nor do they build them up. There are those who are afraid to witness because talking about Christ brings rejection, and we lose friends and company. The Lord has rebuked some people in our ministry for idolizing other people. They talk more about those people’s doings and things, and they end up blindly following everything those people say. The Lord says people idolize things and they become addicted to them. Among others, some of the idols people get addicted to are television, cell phones, shopping, brand names, fake hair and makeup, the Internet (YouTube, email, social media, gossip sites, etc.), alcohol, drugs, cigarettes, sport stars, actors, singing stars, cars, houses, and the list goes on. These are the idols people hold onto and devote themselves to; and they represent nothing Christ-like. Are we not commanded to fix our gaze on the things that builds us up in Christ? (Colossians 3:2; Philippians 4:8).


The Addiction and Idolizing of Television

Finally, the Lord told showed Charis the vision below on May 13, 2014. The Lord showed her three yellow images in the air: a smiling face with one tick mark, a sad face with three tick marks, and an angry face with two tick marks. This is what The Lord said they represent:

We have included the depiction of the faces (as well as the picture that Charis drew of the same) below. 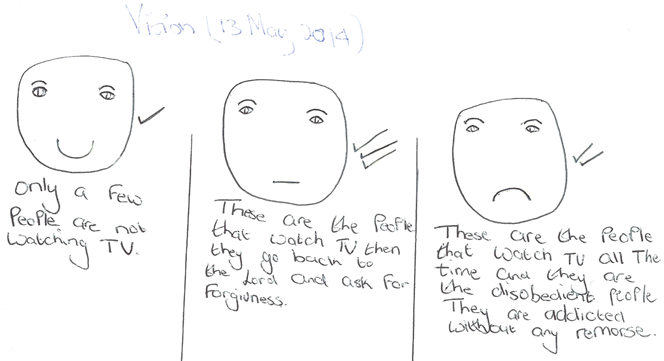 ﻿
Please note that a good Christian channel dishing out the word of God is acceptable, but sitting in front of it everyday becomes an addiction and promotes laziness. It is better to read the Bible and pray instead of being lazy. In the case of those who can't read or are somewhere physically disabled, we can understand if they listen to the radio. Some things on Youtube could be useful in building up if those things relate to us being built up in Christ, however a new addiction of viewing and laziness might be created. There has to be limits.

In conclusion, let us live for Christ and follow Him. If we do so, we will have less of the world and what it offers, but more of Christ in us to offer to the lost.